We are a creative experienced studio who work for clients with a passion for contemporary sustainable design.

The Irish Times and The Sunday Times have profiled the design work of the studio as “a model of pared back simplicity and sustainability”. Its expressed attention to detail and understanding for designing dwellings with clarity, creative interior design, furniture and use of natural materials is recognized by an informed public in the UK and Ireland.

The Studio is led by director John Feely who offers clients unique solutions, attention, and quality that draws on a wealth of accumulated experience including collaborations with leading architects and artists in Ireland. It is committed to the full professional service of its clients and to the making of refined buildings and interiors, operating on the simple principal that well designed and crafted environments will change your life.

It is an open and approachable studio, committed to improving communities by continuing to research and develop work - large and small, in private, residential and commercial areas with a variety of people who acknowledge the value of its particular flair for both modern design and enlightened conservation of period houses through restoration and extension.

Without exception we work to make significant individual work for each client and have developed an ability for overcoming complex urban and rural sites with planning restrictions in areas of environmental importance and natural beauty.

During this time he won a scholarship place to the Royal College of Art London under modernist James Gowan and also represented UCD at the Venice Bienale Student exhibition of 1991.

Johns career spans 20 years and prior to establishing his own architecture studio in 2007, he has collaborated enthusiastically in principal roles in pre-eminent offices on award winning buildings in Dublin, Berlin and London.

Over a ten year period, as a Senior architect in Dublin with the office of de Blacam and Meagher, he was responsible for a broad range of high profile complex projects including a new purpose Dublin Synagogue with Community based Sheltered Housing, Mayor Street Docklands Housing and Urban Design, Aer Lingus International Airport lounges, Coffee Society Retail Shops, Residential Mews Development Monkstown Castle, and two exceptional modern one off houses, Carrowbeg, Cunningham Road, constructed in Dalkey village, and Marthas Vineyard constructed beside Coliemore Harbour, Dalkey which received an RIAI regional award and citation in 2006.

Between 1992-1995, collaborating with Ross O'Brien, John featured in publications by Architectural Association of Ireland and was shortlisted for UK London Minerva Designers award/citations for the internationally recognised interior of the U2 owned nightclub - The Kitchen, Clarence Hotel, Dublin.

In Berlin between 1995-97 he worked with Dorr Ludolf Wimmer on urban design and housing strategies for Landsberger Allee , and state competitions including the 1st Prize winning Spandau Bridge which was constructed in 2000.

In London, John worked with the acclaimed office of Brookes Stacey Randall on the design and construction of the RIBA awarded East Croydon Train Station, and public realm, Recording Studios for the Pet Shop Boys and a Private House for Musician Chris Lowe. The Sunday Times has profiled him amongst Irelands leading architects of his generation. His projects are showcased in Open House Dublins’ annual exhibition/tour and have featured on national radio and television. Selected architectural drawings, Models, Photographs have been published in Architecture Today, Architects Journal, Architectural Review, New Irish Architecture, Irish Architectural Review, Architecture Ireland, Image Interiors.

He has been a studio critic at University College Dublin, DIT- School of Architecture, and South Bank University London.

John Feely is an architect who goes above and beyond the call of duty for his profession, always attentive to my needs and responsive to my concerns. I found John to be a very diligent and professional Architect even under the most trying and difficult circumstances. I would love to work with in the future and have no hesitation in recommending him. Jim Sheridan – (Film Director), Dalkey, Co.Dublin

It was a pleasure to work with John Feely on our project . It took a while to be clear about the concepts that were important to us, however John patiently never rushed or made us feel that we were taking up too much of his time. He is a visionary architect with engaging , practical and contemporary design ideas and we felt he was very committed to what we wanted at every point throughout the process. Our house is now uniquely designed to the needs of our family so much better than in the past, with light filled living spaces. Carol Miley, Jim Miley (founder - MyHome.ie) Dublin

John Feely is a very talented architect and it was a rewarding experience to work with him. He is both exceptionally creative and willing to absorb ideas from his clients. John is very approachable and an innovative professional whose plans perfectly blend design and functionality. The management at all stages of the project was second to none, and of great value to me from beginning to end. Neil Delamere - (Comedian – TV Presenter) Dublin

I would highly recommend John. He designed a physical therapy clinic in a very tight space where good design and ergonomics were critical to my practice. I chose John for two reasons; His unique ability to make any space look larger with simple clean lines whilst being very sympathetic to the surroundings (a conservation zone in my case), and secondly he understood my requirements, really listened and took on board my opinions. His enthusiasm and attention to the very smallest of details, being careful with the budget and keeping a watchful eye over each stage of the build gave me great peace of mind. Lisa Coffey – Physical Therapist, Glasnevin Co Dublin

We use an integrated, open and considered approach at all times, nurturing close relationships with our clients, construction professionals and craftsmen.

We work with enthusiastic engineers, cost consultants and environmentalists.

The studio incorporates at an early stage current sustainable design principals responding to and encouraging maximum use of daylight, fresh air ventilation, use of quality materials requiring traditional and modern techniques that are durable in all environments.

We endeavour always to open and connect building interiors with the outside environment at every opportunity.

We use effective contemporary design techniques that help make bespoke ,economic solutions which are uplifting and comfortable to use. We offer specific expertise and accomplished projects in residential design, ranging from modern one off houses, contemporary multi-unit housing, restoration and extension of period protected and non protected houses, conservation of heritage buildings, commercial interior design, restaurant and retail shop design.

Mews studio of wood and granite 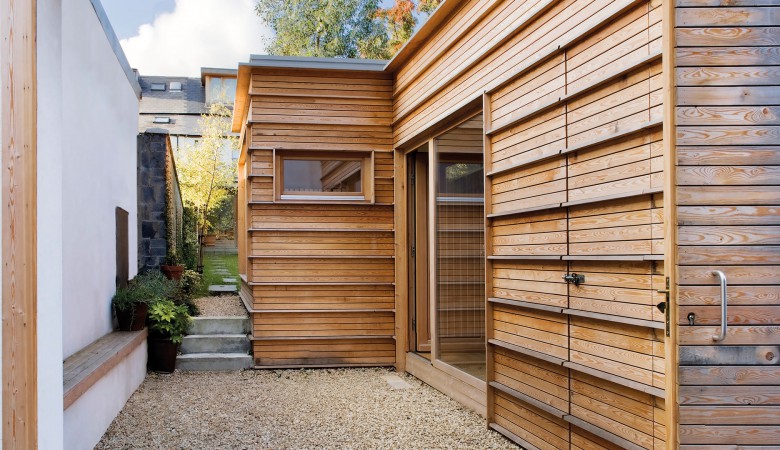 House and gardens for a musician 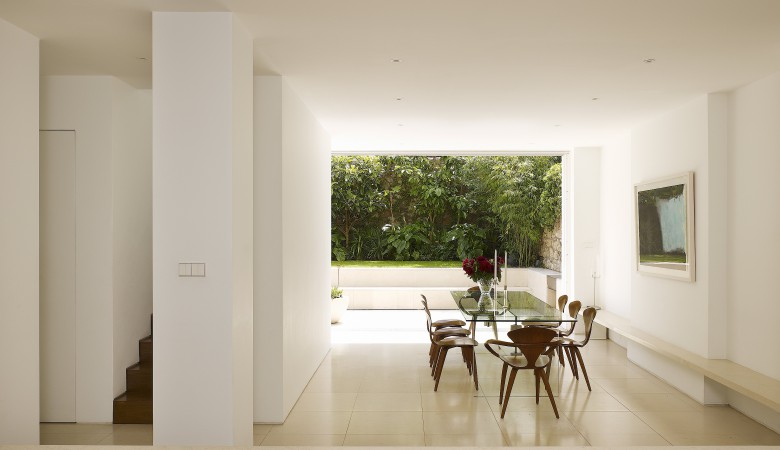 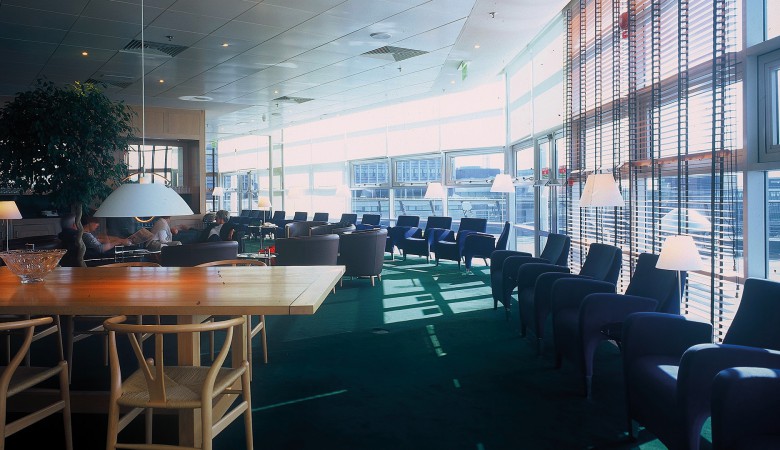 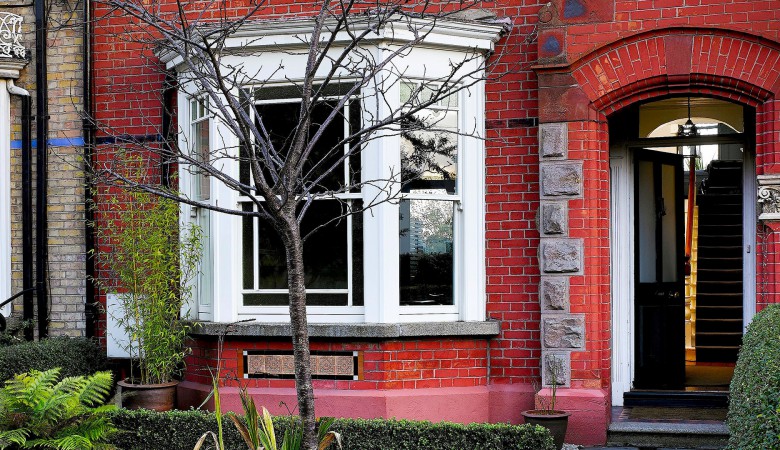 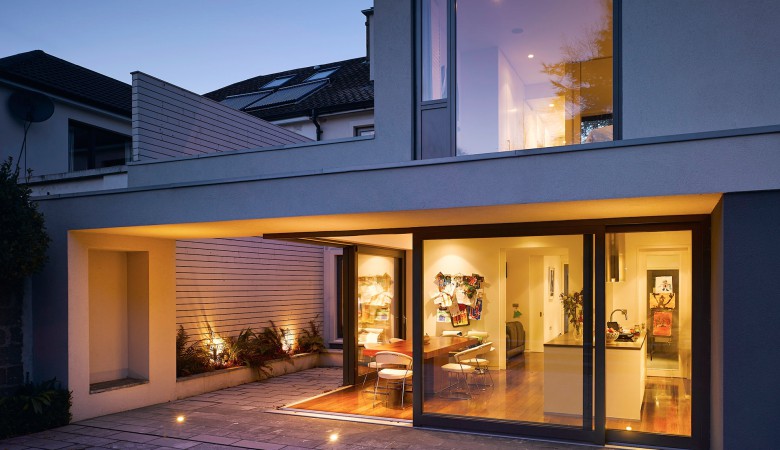 House of Brick and Zinc 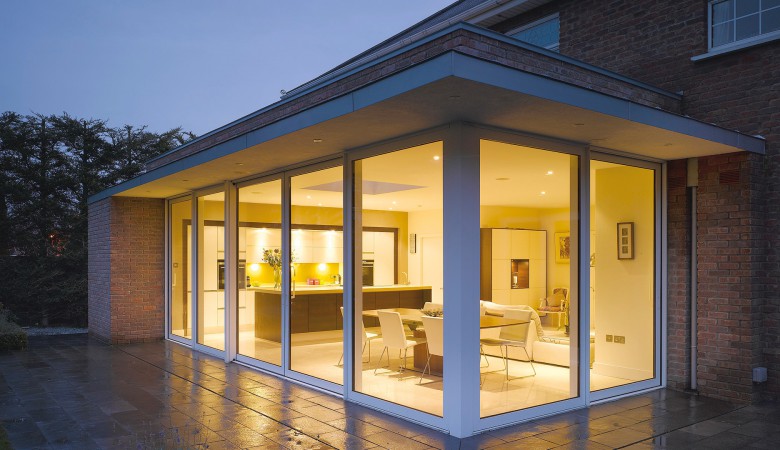 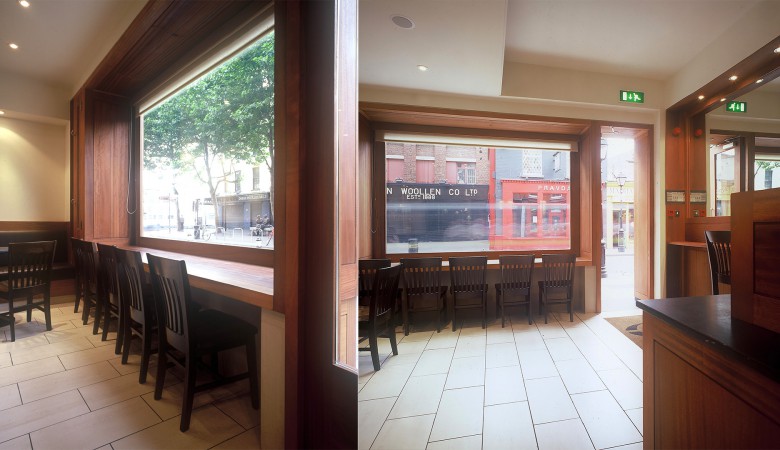 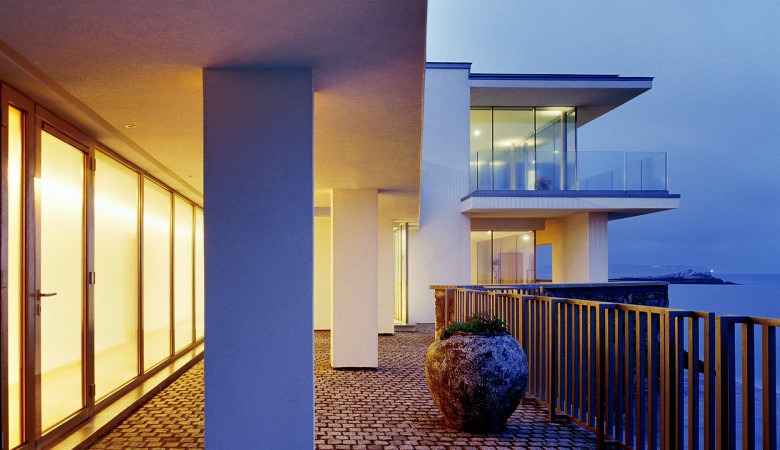 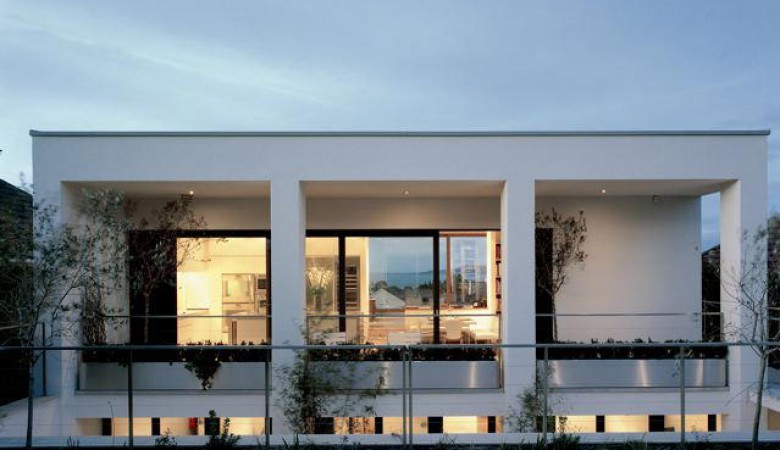 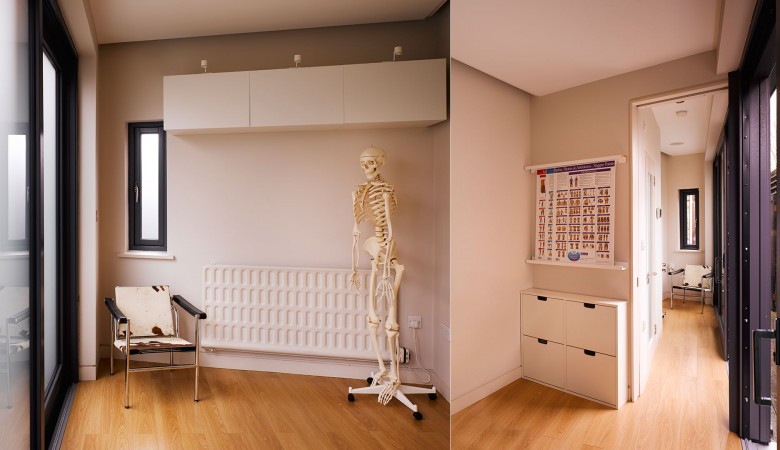 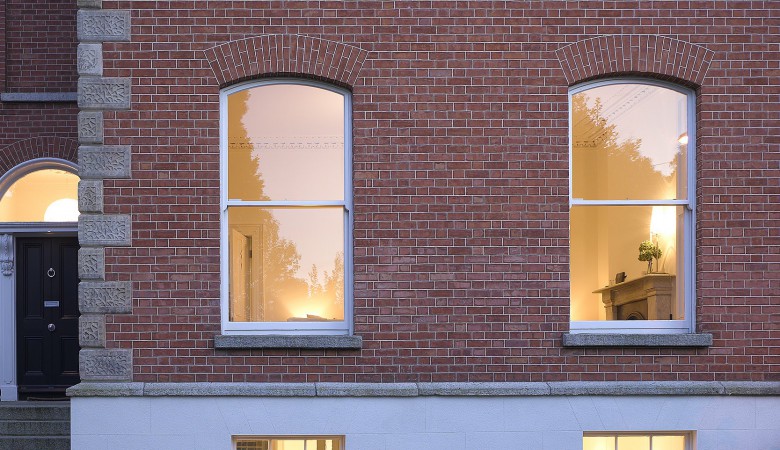 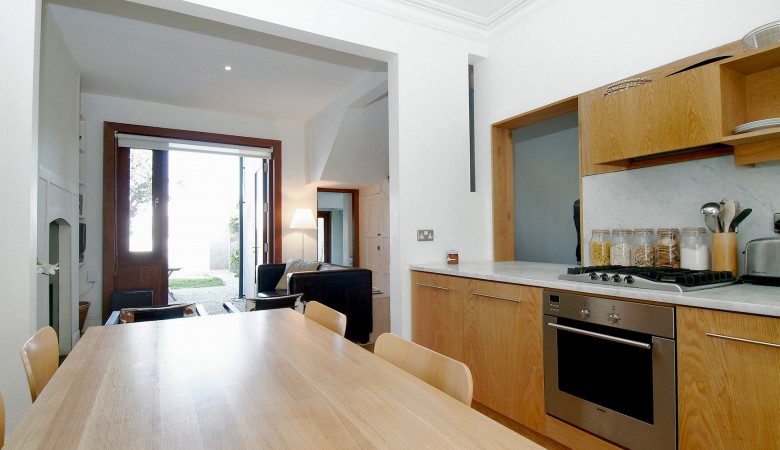 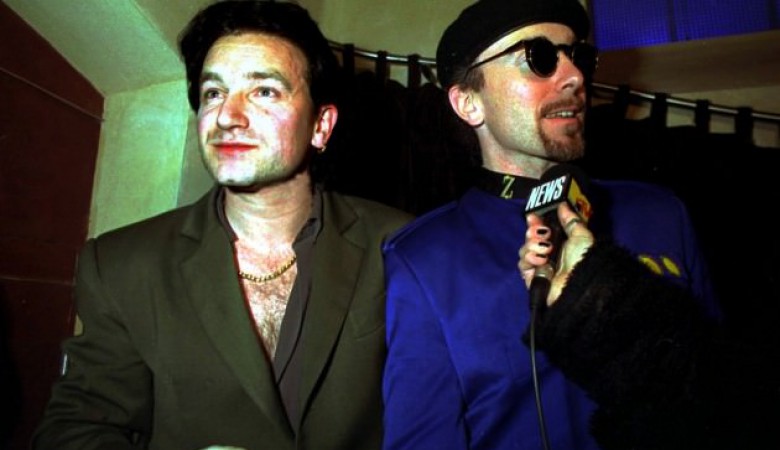 Conservation of a National Protected Structure 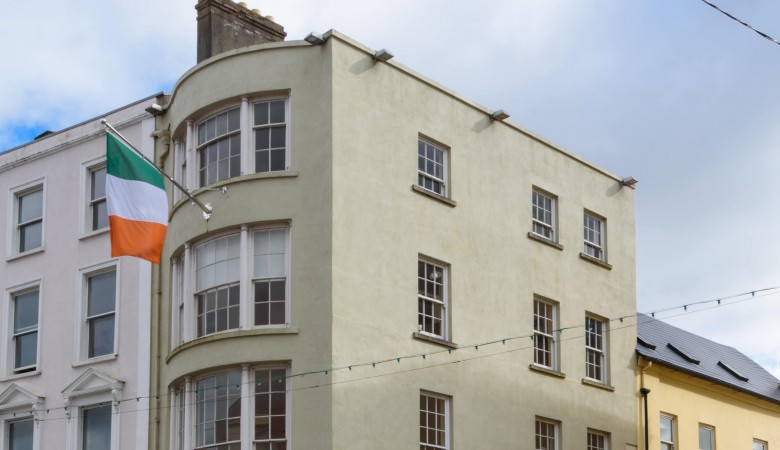 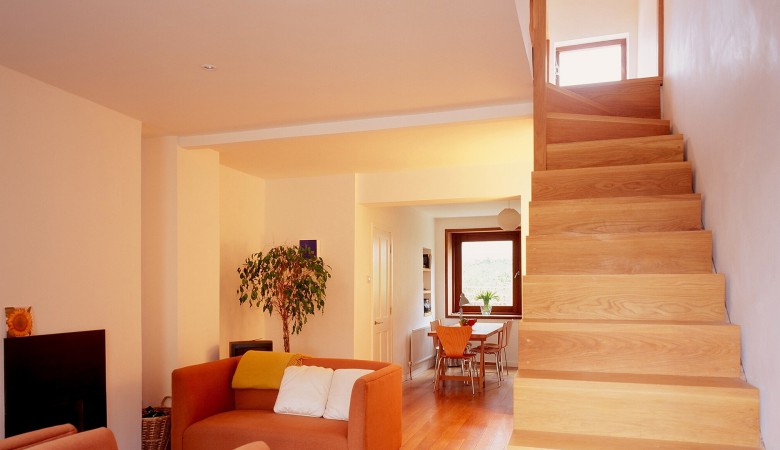 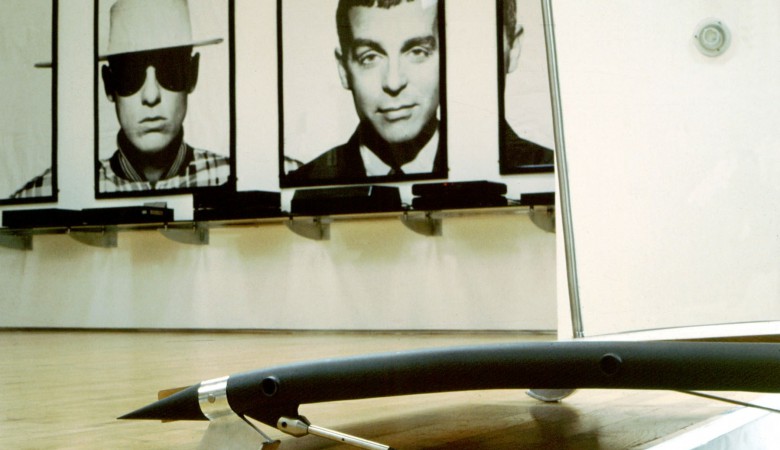 If you have a project you feel we may be able to help with, please get in touch.